Bitcoin dips to support at $24k, but the trend remains positive according to analysts

Editor’s Note: With so much market volatility, stay on top of daily news! Get caught up in minutes with our speedy summary of today’s must-read news and expert opinions. Sign up here!

(Kitco News) – The price of Bitcoin (BTC) pulled back in trading on Friday as the top crypto entered a widely expected period of consolidation following a 10% rally over the span of two days this week.

Data from TradingView shows that bulls ran into resistance at $25,000 during trading on Thursday. Profit taking led to a pullback down to the $23,600 region before buyers arrived to bid it back above support at $24,000.

Kitco technical analyst Jim Wyckoff noted that “Bitcoin-U.S. dollar prices are a bit weaker in early U.S. trading Friday after hitting a two-month high on Thursday,” a trend which continued into the close of the markets.

“The market is in a two-month-old price uptrend on the daily bar chart and bulls have the overall near-term technical advantage. The path of least resistance for prices remains sideways to higher in the near term,” Wyckoff stated.

Bitcoin’s struggle to break above $25,000 was expected by many analysts including pseudonymous Twitter user Crypto Tony, who posted the following Tweet outlining where he thinks the price is headed in the near term.

On the flip side of the discussion, Friday’s pullback is but a brief interlude in the ongoing uptrend that Bitcoin has been on for the past couple of months since bottoming out in the middle of June.

According to crypto market analyst Michaël van de Poppe, as long as Bitcoin manages to hold onto support at $23,000, there is a good chance that it could rally into the $28,000 – $30,000 range in near future.

Intra-day corrections are taking place, but the trend remains to be upward.

As long as #Bitcoin consistently holds $23K, upwards continuation towards $28-30K is a likely case. pic.twitter.com/HQH3zPx0pg

Evidence for the possibility of such a strong move higher can be found by looking at the volume profile for Bitcoin in the range between $24,000 and $30,000, which is “very thin” according to independent trader and analyst Jonathan Morgan. 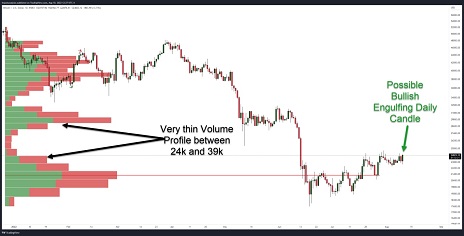 “Thin Volume profiles act as a sort of vacuum and ‘suck’ price through it from one high volume node to the next high volume node. In other words, it’s easier here for BTC to move higher than lower, and it should move exceptionally faster the higher it goes,” Morgan stated in a conversation with Kitco Crypto.

Price action in the wider crypto market was relatively flat on Friday, with a majority of tokens in the top 200 slightly in the green aside from a few exceptions.

IOTA Guide – Everything you need to know about IOTA Crypto

The New Link Between Virtual and IRL NFT Experiences?

The New Link Between Virtual and IRL NFT Experiences?